On the results of vote "gr_private2"

Given that I started the GR process, and that I called for discussion and votes, I feel somehow as my duty to also put a simple wrap-around to this process. Of course, I’ll say many things already well-known to my fellow Debian people, but also non-debianers read this.

So, for further context, if you need to, please read my previous blog post, where I was about to send a call for votes. It summarizes the situation and proposals; you will find we had a nice set of messages in debian-vote@lists.debian.org during September; I have to thank all the involved parties, much specially to Ian Jackson, who spent a lot of energy summing up the situation and clarifying the different bits to everyone involved.

So, we held the vote; you can be interested in looking at the detailed vote statistics for the 235 correctly received votes, and most importantly, the results: 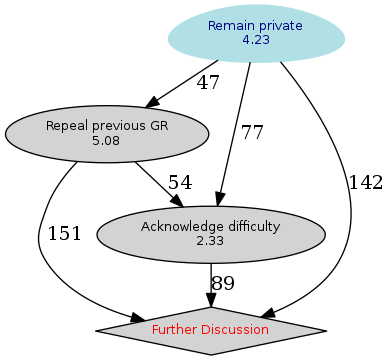 First of all, I’ll say I’m actually surprised at the results, as I expected Ian’s proposal (acknowledge difficulty; I actually voted this proposal as my top option) to win and mine (repeal previous GR) to be last; turns out, the winner option was Iain’s (remain private). But all in all, I am happy with the results: As I said during the discussion, I was much disappointed with the results to the previous GR on this topic — And, yes, it seems the breaking point was when many people thought the privacy status of posted messages was in jeopardy; we cannot really compare what I would have liked to have in said vote if we had followed the strategy of leaving the original resolution text instead of replacing it, but I believe it would have passed. In fact, one more surprise of this iteration was that I expected Further Discussion to be ranked higher, somewhere between the three explicit options. I am happy, of course, we got such an overwhelming clarity of what does the project as a whole prefer.

And what was gained or lost with this whole excercise? Well, if nothing else, we gain to stop lying. For over ten years, we have had an accepted resolution binding us to release the messages sent to debian-private given such-and-such-conditions… But never got around to implement it. We now know that debian-private will remain private… But we should keep reminding ourselves to use the list as little as possible.

For a project such as Debian, which is often seen as a beacon of doing the right thing no matter what, I feel being explicit about not lying to ourselves of great importance. Yes, we have the principle of not hiding our problems, but it has long been argued that the use of this list is not hiding or problems. Private communication can happen whenever you have humans involved, even if administratively we tried to avoid it.

Any of the three running options could have won, and I’d be happy. My #1 didn’t win, but my #2 did. And, I am sure, it’s for the best of the project as a whole.